What Is Fluorescent Brightener?

2. Phenyl coumarin, chemical structure as below

How Does Optical Brightener Work?

Optical brighteners or fluorescent whitening agents (FWA) are colorless to weakly colored organic compounds that, in solution or applied to a substrate, absorb ultraviolet light and re-emit most of the absorbed energy as blue fluorescent light between 400 and 500 nm. 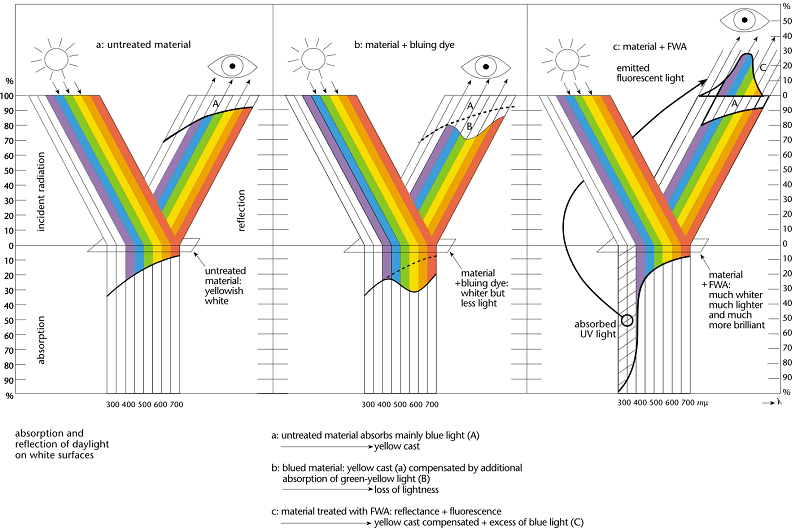 Materials that evenly reflect most of the light at all wavelengths striking their surface appear white to the human eye. Natural fibers, for example, generally absorb more light in the blue region of the visible spectrum (‘blue defect’) than in others because of impurities (natural pigments) they contain. As a result, natural fibers take on an unwanted, yellowish cast. Synthetic fibers also have this yellowish cast, although not as pronounced.

Whiteness in substrates can be improved by (1) increasing reflection (reflectance) or (2) compensating the blue defect. Bleaching has both of these effects to some extent, but invariably leave behind part of the yellowish cast. Even the most thorough bleach cannot remove all traces of a yellowish cast. Before the advent of fluorescent whitening agents (FWA), the common practice was to apply small amounts of blue or violet dyes (called ‘bluing’) to boost the visual impression of whiteness. These dyes absorb light in the green-yellow region of the spectrum, thereby reducing lightness. But, since at the same time they shift the shade of the yellowish material towards blue, the human eye perceives an increase of whiteness.

Unlike dyes, FWAs offset the yellowish cast and at the same time improve lightness because their bluing effect is not based on subtracting yellow-green light, but rather on adding blue light. FWAs are virtually colorless compounds which, when present on a substrate, absorb primarily invisible ultraviolet light in the 300-400 nanometer (nm) range and re-emit in the visible violet-to-blue fluorescent light. This ability of FWAs to absorb invisible short wavelength radiation and re-emit in the visible blue light which imparts a brilliant whiteness to the light reflected by a substrate is the key to FWAs effectiveness.

Appearance, Volatile content, Max melting point, Content are typical testing items in Certification Of Analysis (COA) each mass production batch.
How to test optical brighteners in plastics?
1.Immigration and bleeding
it is better to observe immigration and bleeding of optical brightener in UV lamp, yellow and green spots could be scattered on the surface of plastics. The fluorescent light of spots is much higher than in other areas.
2.Whitening effect
The whitening effect of optical brightener agent could be estimated by the visual method which betters under the sunlight or measured by the colorimeter.
3.Light Fastness
There is no international standard for testing optical brightener lightfastness in plastics. most tests used DIN 54004 for reference. One may better and objective method is to test plastic whiteness movement with exposure time。

How To Choose Optical Brightener Agent?

Things to Know When Choosing Brightener Agent For Plastics?

1.Whitening Effect
The whitening effect is related to the substrate to whitening, processing conditions and possible interactions with other components in the formulation.
2.Responsiveness
OBAs should compatible with plastic in case of bleeding. Compared with textile, thermoplastic usage OBAs shall require higher heat resistance and lower volatility.
3.Light Resistance
Fluorescent optical brightener had a limited light resistance, much lower than pigments and most plastics. While in many cases, the photochemical degradation of fluorescent whitening agents shall not yellowing the plastics.
4.Hue
In most cases, people would prefer mid to blue to bluish green shade rather than red.
5.Processing condition
To maximize the whitening effect, OBAs should completely resolve or evenly dispensed into the product.
6.Other Components
Other components in systems, such as pigments, UV absorber, titanium dioxide pigments (TiO2 ) absorb light in the same UV wavelength range as fluorescent whiteners, thus reduce OBAs whitening effect. Anatase-type titanium dioxide pigments absorb approximately 40% of the incident radiation at 380nm, while rutile type titanium dioxide pigments absorb about 90%. UV absorber absorber the light as well while whitening effectiveness is less reduced.

As chart below, we listed the typical plastic and detergent applied optical brightener

How to choose optical brightener for PVC

(this part to be updated)

How to add optical brighteners into plastics?

Optical brighteners are added during thermoplastic molding process, rather than added in liquid form afterward, that’s the word mass-whitening come from.Generally, OBAs were mixed with powder or granules plastic For flexible PVC, OBAs were added in solution form or dispense into plasticizer. OBAs were used in masterbatch form to gain a better dispense effect in plastic. For PET fiber, some OBAs could add during polymerization process which in monomer from. in this way, stable heat resistance and low volatility is required for OBAs
Sign Up for Our Newsletter!
We’ll provide useful product/market info.
Go to Top