2.1 Global and China Organic Pigment Market Scale
From the Year 2011 to 2016 period , As chart below 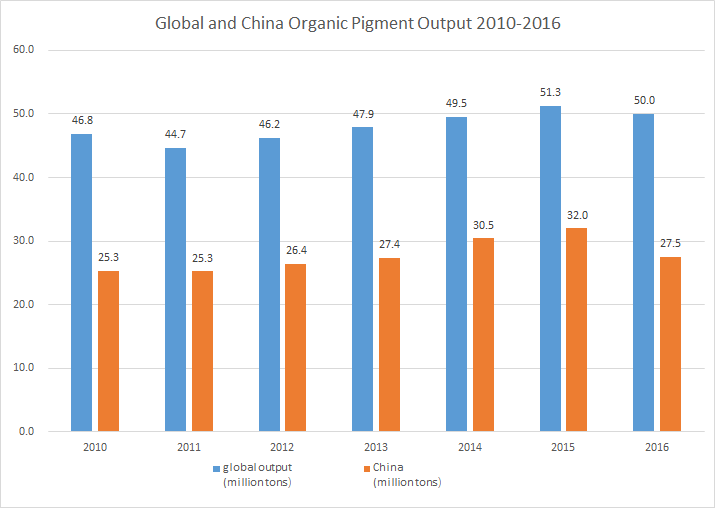 There are 160-170 organic pigment manufacturers in China and among them, the first 40 factories take up about 80% total output. According to broker‘s data, there are 4000 pigment dealer and distributors in the market.

2.2 India Pigment Market Scale
India pigment market scale reaches 0.454 billion USD in the Year 2015.Among them, blue and green pigment take the majority in the color segment. For high-performance pigment which key intermediates import from China, it’s still in the incubation period.

As chart below,which ink is about 55% ,paint takes about 20%,plastic is 15% ,other applications is 10%. The chart above represents overall structure recently. Segmentation by the application may vary in vendors and countries and shall change over time. 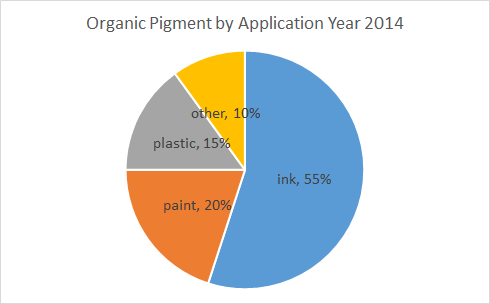 5.1 Organic Pigments Industry Trend
Before the 1980s, Europe and the United States had played a leading role in manufacturing. After the 1980s, production gradually transferred to Asia mainly China and India. In Recent years, there is a capacity excess of organic pigment worldwide. Industries in unorganized sector account for a large share in the production of pigments. This results in intense price competition in the commodity segments market.

The global organic pigments market to grow at a CAGR of more than 3% to 3.5% between 2017 and 2021 main production areas includes China, India.we assume China pigment industry trends as follows
● the concentration of organic pigment segment will increase
● vendors getting lessen
● profitability getting better